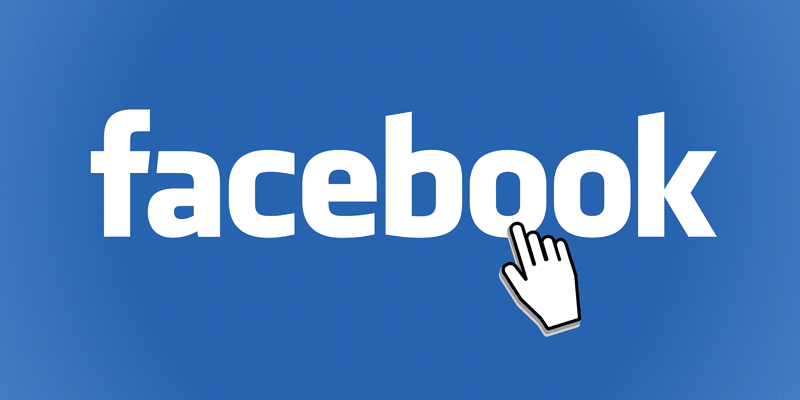 Advertising on Facebook means that you need to track lots of different metrics, and here are some of them:

Anyway, one of the most important metrics is a CTR.

That’s because a high CTR means that people are interested in your ads and the job of Facebook is to provide their users relevant ads.

In this blog post, I’ll explain to you what is a CTR on Facebook, what’s the average CTR you should see, how to calculate it and where to check it, and so on.

Now, let’s dive into the world of Facebook CTR.

CTR stands for Click-Through-Rate which means the percentage of people who clicked on the specific Facebook post (or ad).

When we discuss Facebook CTR, we usually think about the following two:

As for the organic post, you probably know that the organic reach isn’t the same as it was a few years ago. 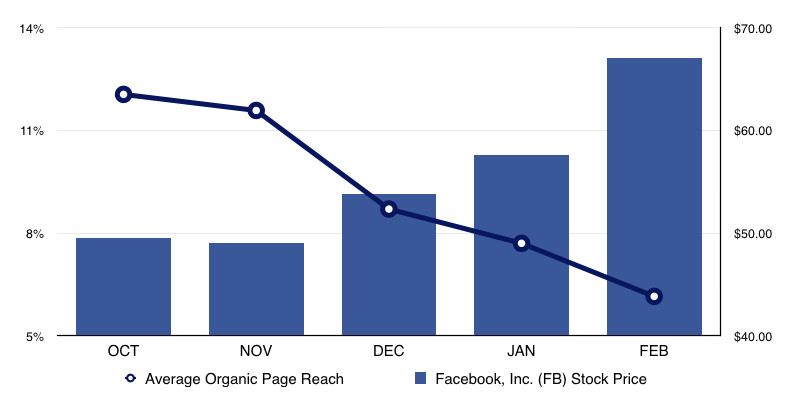 As you could see, as long as organic reach decreases, Facebook stock price increases.

This is deadly simple. Facebook wants that business owners to invest money in ads. If you want to reach as many as possible people you’ll definitely need to invest some money.

How To Calculate a CTR 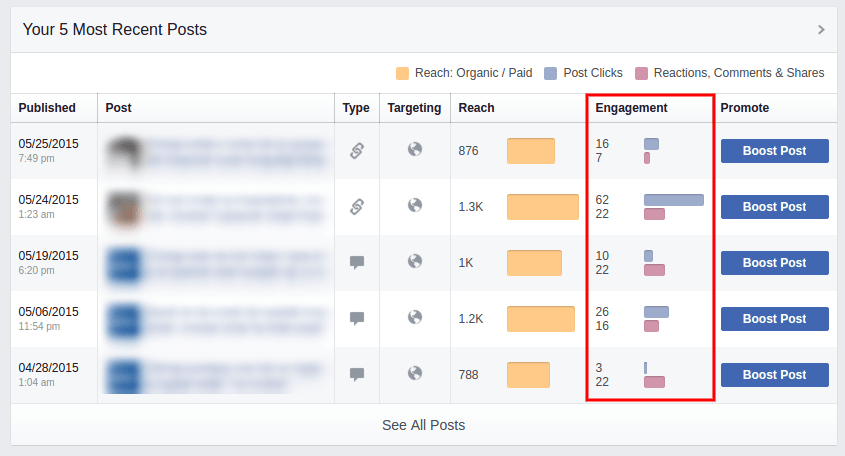 However, you don’t need to use the formula in order to check the CTR of paid posts.

Facebook does it for you automatically, but before I go in Ads Manager, let’s see the benchmarks and what the average CTR you should expect.

How large the average CTR will be depend a lot on the industry you work in.

If you work in the Automotive industry, you should see the CTR above the average. Specifically, this research claims that it should be 3.57%. 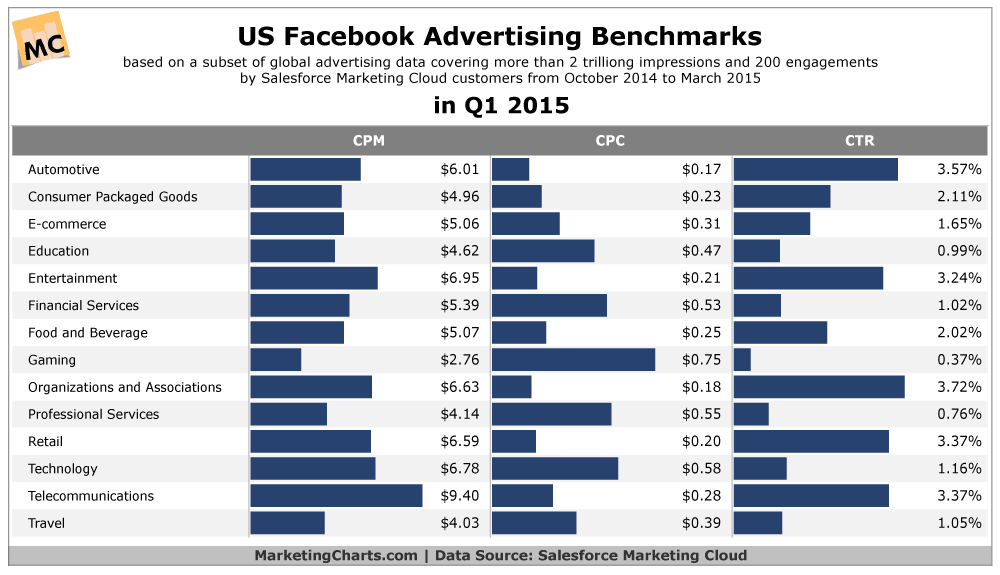 It’s well-known that there’s a strong negative correlation between CPC and CTR.

Simply said, when your CPC increases it means your CTR will decrease. 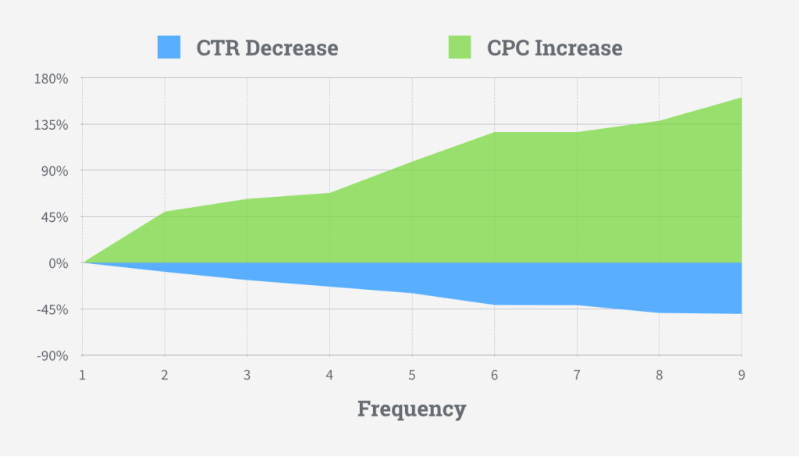 This usually happens when the frequency number increases.

People are not interested in watching the same ad, so it means that CTR will go down. According to AdEspresso, ads with higher CTR tend to have higher Relevance Score. 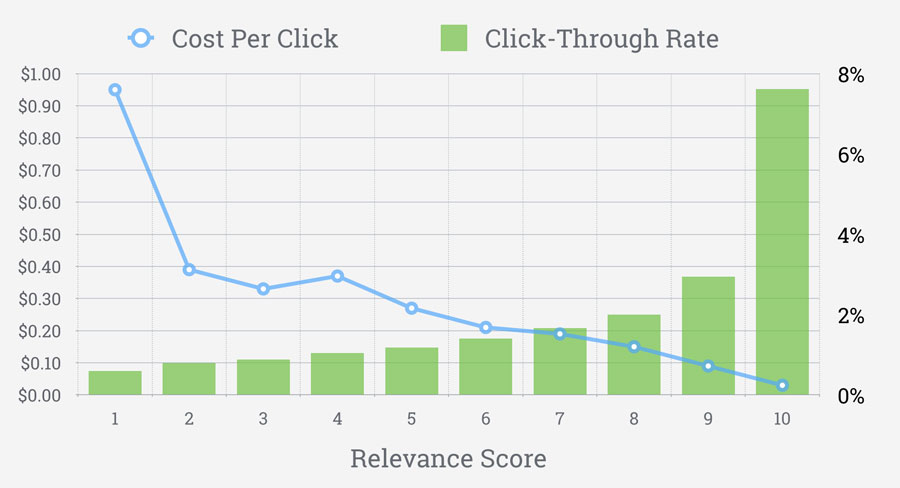 In simple terms, the higher Relevance Score you get, the less Cost per Click you’ll see. This is another reason why CTR matters.

In my case, there’s no CTR column, so I need to add it by clicking on Columns: Performance. 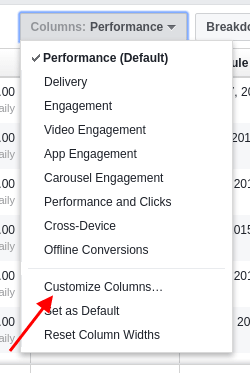 After the small menu appears, the next step is clicking on Customize Columns… and one modal dialog will appear.

There, you should simply search for CTR metrics (columns). 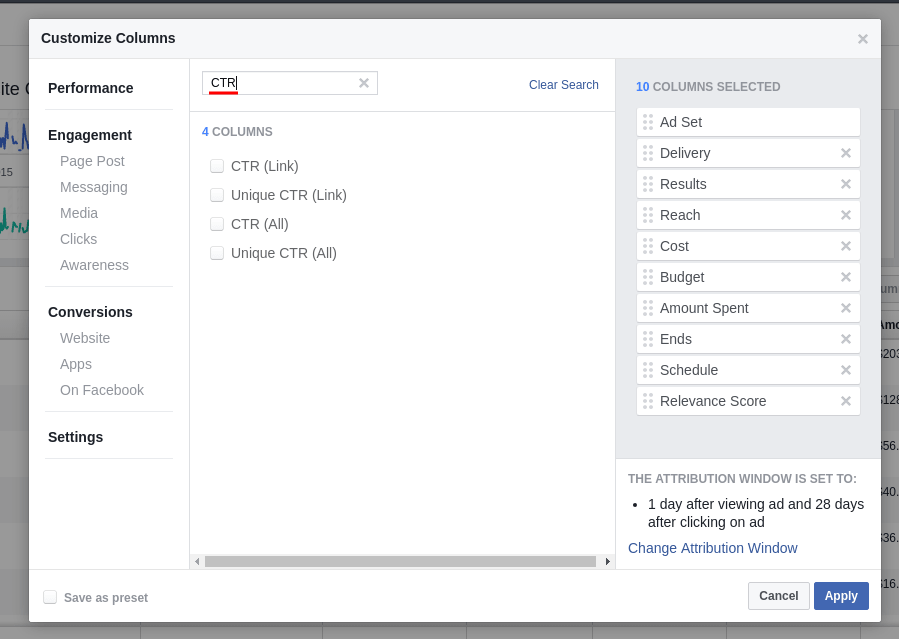 As you could see, there are four metrics and here’s the explanation for each metric.

The percentage of times people saw your ad and performed a link click.

The percentage of people who saw your ad and performed a link click.

Click-through rate for all clicks. The total number of clicks you received (ex: offsite clicks, likes, event responses) divided by the number of impressions.

The unique click-through rate for all clicks.

Now, once you add these columns, you should see something like this.

Of course, if you click on the specific ad set, you’ll see CTR metrics for every single ad.

This is very important because this way, you’ll see which ads are the most attractive to the targeted audience.

How To Increase a CTR?

Firstly, you should always include appropriate CTAs.

The following photo suggests that when you add a CTA button, an overall CTR will lift 2.85x times. 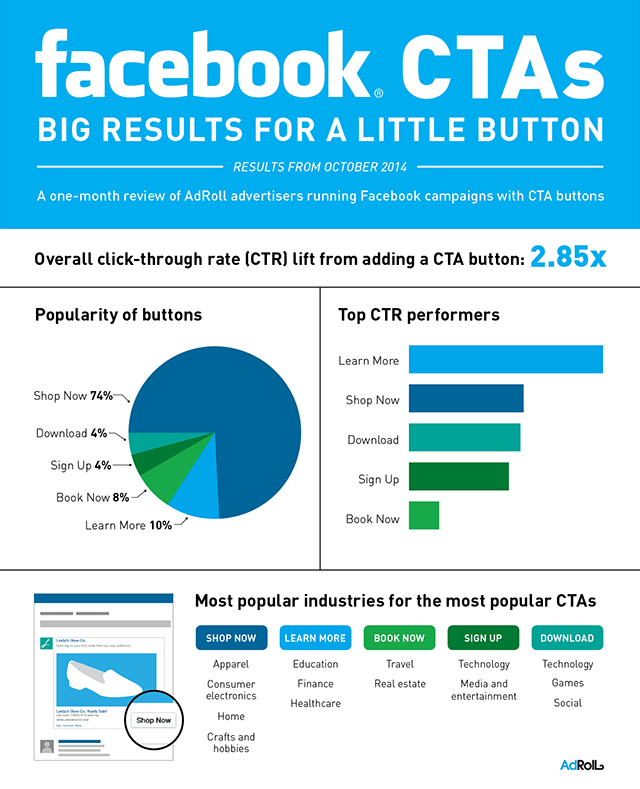 Which exactly CTA you’ll use depends on the type of ad and the industry as well.

For example, it’s obvious that retail stores should use Shop Now, but if you’re offering a free eBook then you might be interested in Learn Now or Download CTAs.

Another way of increasing CTR is using attractive photos in your ads. When you create a new campaign, you’ll see the following three options:

Firstly, Browse Library means that you can use the photos that you’ve already used in your ads.

Secondly, using Free Stock Images means that you can use images from ShutterStock free of charge.

This is the result of the deal between Facebook and ShutterStock. For example, you can click on Free Stock Images.

There, if you search for SEO related photos, you’ll see VERY attractive photos. 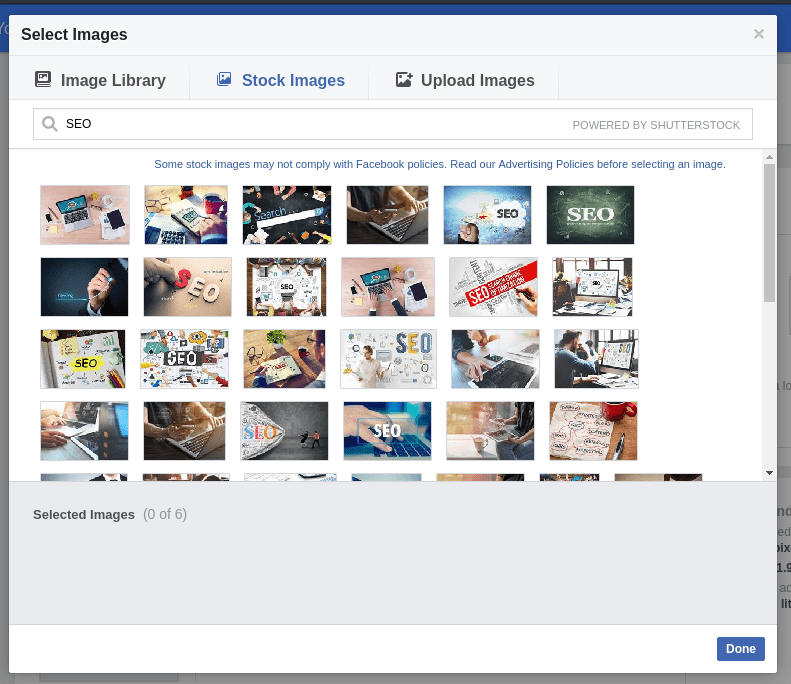 Thirdly, if this doesn’t fit your needs, you can upload your own photo. But, I’m pretty sure that 80% advertisers pick a photo from ShutterStock.

This guess actually comes from the Pareto Principle. According to Fast Company, picking the shorter headline is always better since it posts with 80 characters or less receive 66% higher engagement. 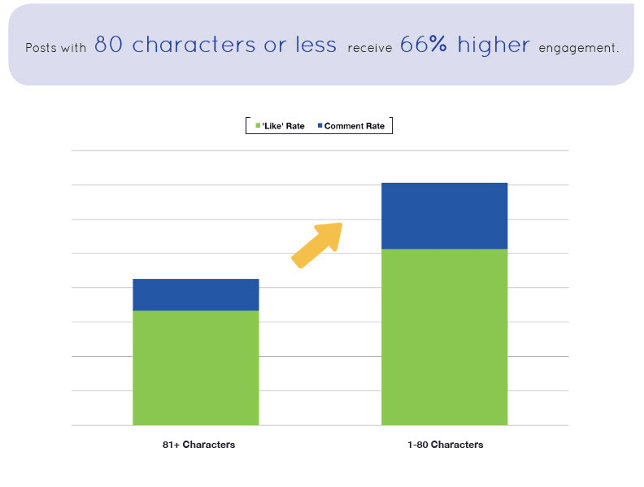 It makes sense. Posts that are too long are boring to read and people tend to skip it.

However, you can’t have headlines with one or two words. Furthermore, ad scheduling may increase the number of clicks your ads see. 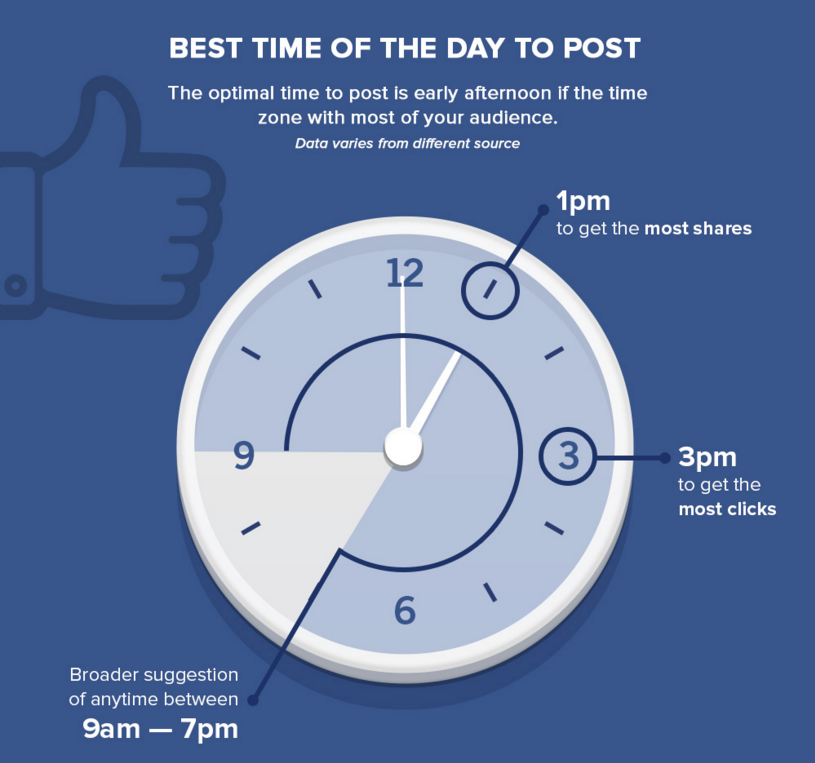 It appears that 3 p.m. is the time when you can get the most clicks which means that you should increase your bids at that time.

Also, having a Facebook Page is required if you wish to advertise which means that you probably have some fans who are interested in your business.

If that’s true, you should check when your fans are online. 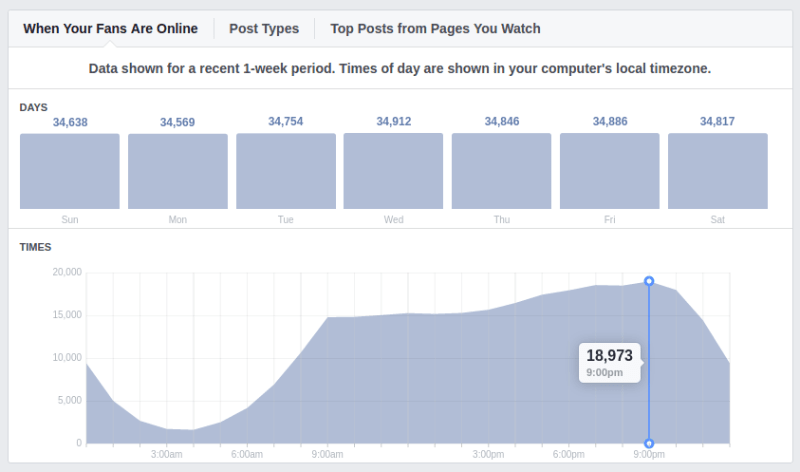 For one of my pages, it says that 9 p.m. is the hour when the most fans are online.

What do I want to say?

When you realize when consumers who like your page are online it means that the most of your potential customers are online at that time too.

Simply said, increase the bids at that time and you’ll have the increased traffic.

So, what’s a good CTR? Hard to say. However, you should know that CTR for desktop newsfeed and for the right sidebar isn’t the same.

Everything above the industry standards is fine to me. I think that having a CTR above 2.5% is AMAZING and you should keep up the good work in case having such a high CTR.

Also, don’t forget CTA since it may increase a CTR 2.85x times which is fantastic. As long as you keep your CTR high, your CPC will go down.